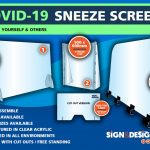 Our Coronavirus Sneeze screens help to protect you and your employees.

Easy to assemble and manufactured in clear acrylic the screens can be used in all environments where the virus could be a threat.

Available with cut outs and as free standing units as well as bespoke sizes for your business. 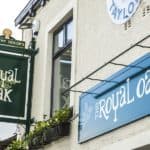 If you’re a pub, restaurant or hotel you will want to do everything you can to attract potential customers – especially on the run up to Christmas.

With less than a month to go until the Big Day, people are already looking, and booking, for the perfect work party venue or the big family Christmas meal. But don’t worry there’s still time to get your signage in tip-top condition ready for one of the most important calendar events. END_OF_DOCUMENT_TOKEN_TO_BE_REPLACED 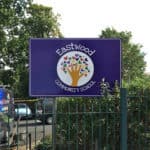 We have worked in the education sector for many years and were delighted when Eastwood Community School got in touch regarding its school signage.

The school started from scratch, completely changing its whole brand image. They wanted something fresh, colourful and that caught the eye. As a result, it needed new signage throughout the school – internally and externally which was something we could happily help with. 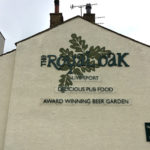 We were delighted to be part of this extensive project which saw a number of its properties have new external and internal signage designed and installed, including our very own local, The Royal Oak in Keighley. 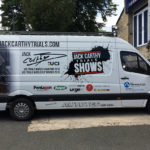 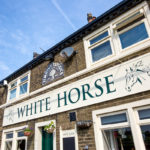 New Signage for The White Horse

As part of an extensive brand overhaul for established real-ale producers, Timothy Taylor’s, the company wanted new signage for a number of its pubs.

As part of the project, we worked closely with the client to create mock-ups so that they could see what the finished piece would look like. Once approved, we then installed the signage. The White Horse in Thorton looks fabulous, clean and very inviting. Great for food and a pint, so we weren’t complaining! 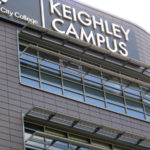 We were contacted recently regarding Keighley College’s new campus. They wanted brand new signage to welcome students and visitors. This was a sizeable project as the signage needed to fill the floor to the top of the building glass entrance. We created an eye-catching design using its logo.